During my Master’s exhibition of paintings ‘Furrows and Sickles’ in the Old Arts Building of the University of Pretoria in 1996, I incorporated exterior and interior art installations as part of a thematic exploration of Healing through metaphors of the land, harvesting and maize. These spacial works also facilitated direct community participation in the art and served as a platform to donate maize meal to the wider community through the Women’s Outreach Foundation. Maize meal is the staple food of South Africa. 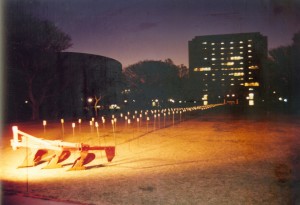 On 8 August 1996, the day prior to National Women’s Day in South Africa, the installation ‘Cultural Field’ was present on the lawn in front of the Old Arts Building on the main campus of the University of Pretoria. The art work consisted of 300 steel rods, 300 pieces of reflector tape, three flood lights and a plough with three blades. The rods were aligned in three rows with a length of 100m each, symbolising a maize field. 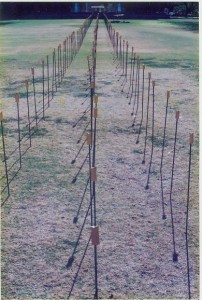 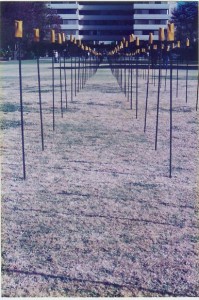 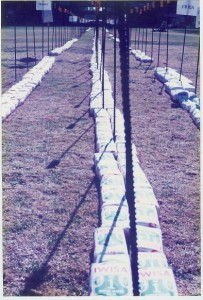 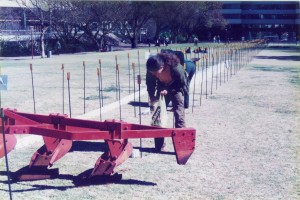 The community – individuals, groups, businesses –were invited to contribute visually, symbolically and financially by donating any brand of 2kg maize meal bags. The cultural diversity of South Africa is alluded to in the multilingual packaging of maize meal. During the day volunteers and the public packed the donated bags of maize meal into the installation on the three lines. Before the opening of the exhibition in the evening, volunteers (mostly art students) moved the maize meal bags from the field to the inside of the gallery and packed it into another installation called ‘Heart Ship’. Further donations followed from guests attending the opening and the eventual offering amounted to 2300kg of maize meal. During the opening event of the exhibition the flood lights on the field were switched on and the 300 pieces of tape reflected light into the darkness. 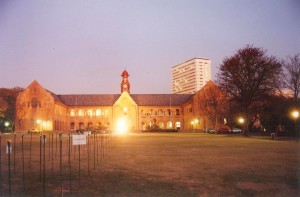 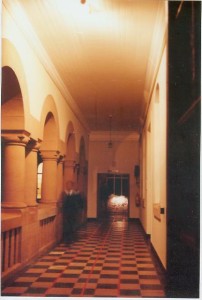 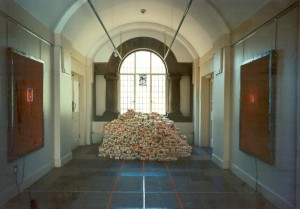 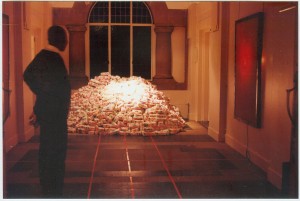 The installation “Heart Ship” was in the central space of the gallery connecting the east and west wings. Three lines of red reflector tape ran from south to north over the balcony floor into the mount of 2300kg maize meal bags. On opposite walls facing each other were two large, heavy steal frames with stretched red velvet. In the middle of each frame hung carefully grafted objects, each depicting the diagram of a human heart. Both were made from red and white glass, one in the tradition of stained glass by Leonie Meyer one in the tradition of bead weaving by Katrina Mahlungu. Each measured 17 x 20cm and were lit from behind. 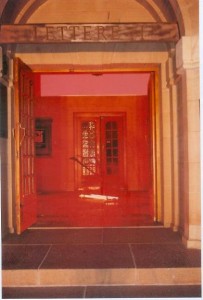 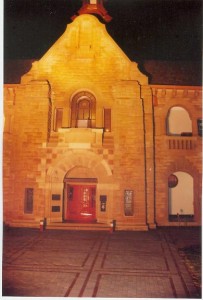 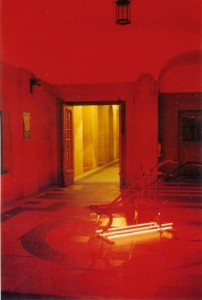 The installation ‘Five Furrows’ in the entrance foyer of the building consisted of an old, rusted plough with five shiny, steel blades, which were elevated over three parallel aligned neon bulbs. The red glow of the lights filled the arched space and enfolded visitors as they entered and moved through the space to the stairs which led up to the balcony and gallery space. Furrows are the beginning of the harvest – the first phase. Furrows are also synonymous with wounds, which could be considered a positive stage in the healing process. Wounds are also associated with birth and rebirth. 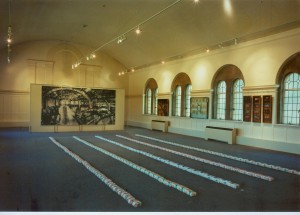 Five rows of multi packaged maize meal bags on the floor of the gallery space alluded to the other three installations mentioned above and was also named ‘Cultural Field’. On the far side is the painting ‘Inner Space’, painted with black enamel on the inside surface of stretched maize meal bags. The architectural space of the painted space echoes the arched ceiling of the gallery and the title could also allude to man’s physical and spiritual inner space. There were 24 other paintings in the exhibition exploring aspects of the physical, spiritual, individual, societal, personal and environmental aspects of the theme of healing through the methaphors of the land, harvesting and maize. 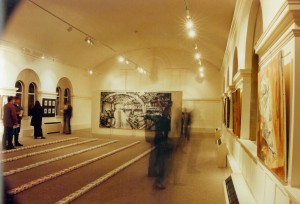 An excerpt from an article written by Bertie du Plessis for the exhibition in 1996 :”But this is not an exhibition only for the viewing and for contemplation. As far as this exhibition is ‘conceptual’ it is not shocking and anti-bourgeois as is the tradition in conceptual art. Everything here is seeped in a deep and thorough experience of the human condition. It is not emotional bravado or intellectual superiority which is asked for, or elicited from the viewer.

She asks from us participation. She reaches further than an aesthetic experience to acts of charity and compassion. But in reaching beyond the aesthetic she does not devaluate art. Rather she reminds us that in the symbolic vision of art we may gain clarity of insight and purity of heart. Thus we are enabled to live as responsible, caring human beings in the shadows and the sun, the sowing and the reaping of human existence”

After the duration of the exhibition, charities allocated by the Women’s Outreach Foundation collected the maize meal bags for their communities.  The exhibition was sponsored by IWIZA and IMPALA maize meal brands. 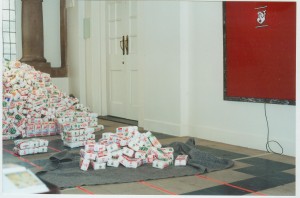 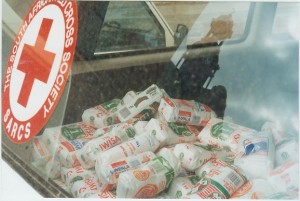 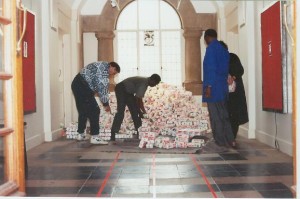 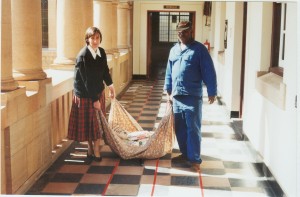