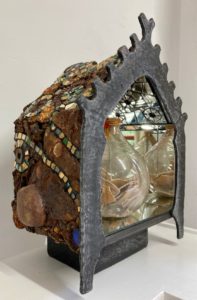 This mosaic artwork was exhibited in the Scott Gallery in the Hawick Museum together with work from members of the British Association of Modern Mosaic.  The theme of the exhibition was ‘Look back and smile’, a line from Sir Walter Scott’s poem ‘The Bridal of Triermain”, 1813. In 2021-2022 Scotland celebrates the 250th anniversary of Sir Walter Scott.

The idea for ‘Curiosity’ is inspired by Sir Walter Scott’s cabinet of curiosities in the Library of the Abbotsford House on his estate. ‘Curiosity’ was purposely designed and built as a cabinet to incorporate an earlier artwork from 1995 called ‘Intitled’.  This piece formed part of a group art exhibition in South Africa at the time of the Rugby World Cup. Participants were invited to make an art work from an ostrich egg. I collaborated with artist Hanneke Benade and we worked with a glassblower from the University of Pretoria to create a glass bottle around and ostrich egg. All attempts failed to keep the egg intact and we ended up with a bottle the size of an ostrich egg with scorched, broken fragments of the egg shells inside.

The shape of the dark frame on the front of the cabinet is inspired by the features of the fireplace in the Entrance Hall of Abbotsford House. The imitation slate of the frame nods towards Scott’s use of Medieval reproductions to create a historic feel on his estate. The choice of mirror for the inside of the cabinet alludes to Scott’s fascination with mirrors and illusions.

The cabinet in itself becomes the curiosity, hence the title ‘Curiosity’.

A 2021 summer project photographed in a temporary location at St Cyrus in Scotland. The base for the seat was made during a two-day poly sculpting workshop in Edinburgh brilliantly taught by Tamara Froud. The idea of the seat is inspired by a seedpod from my mother’s garden in South Africa and a small shell from the Netherlands.